I also make them pretty. 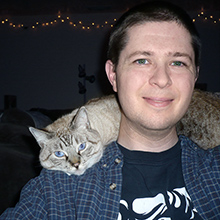 I'm a web developer and designer based in Fresno, CA with over sixteen years of professional experience. Sonoma State University taught me to program, but The Complete Idiot’s Guide to HTML got me started on the web, and I’ve been teaching myself ever since.

I love creating designs that bridge the gap between looking great and being usable for the widest possible audience. I hand write as much of my HTML and CSS as possible with the user experience kept firmly as the highest priority.

I mainly develop ASP.Net web apps with a VB.Net and SQL server backend, but also have some experience with PHP and mySQL.